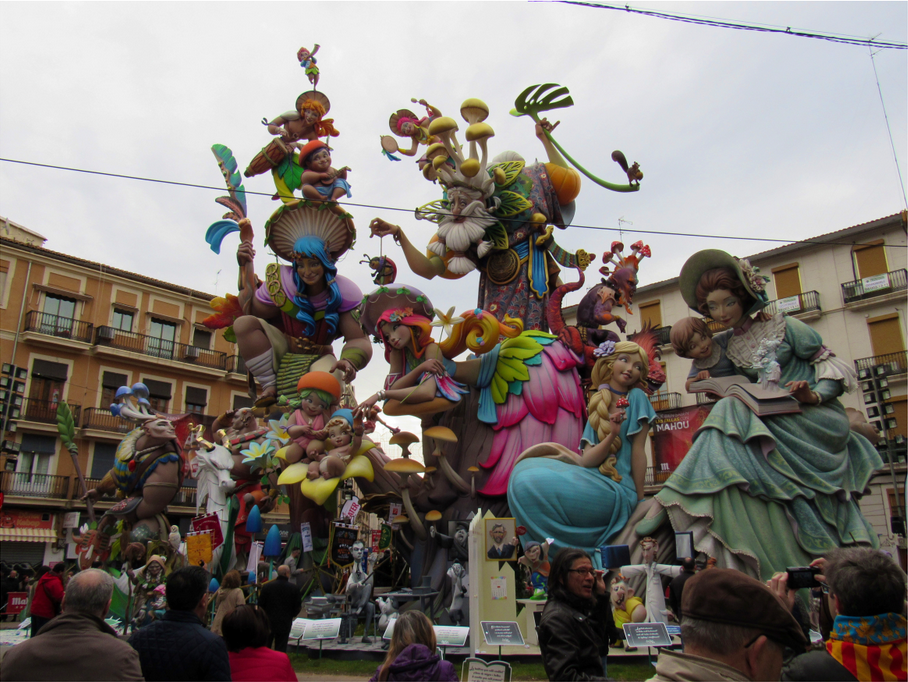 During the month of March the city of Valencia celebrates its most famous festival, which is part of the UNESCO World Heritage. The fiesta is called Las Fallas, in Valencian language it is also called “festes de Sant Josep”, as celebrated in honour of Saint Joseph, (19th March) the patron saint of carpenters.

The origin of las Fallas comes from the old carpenter’s tradition, when celebrating the arrival of spring on 19th March, to burn pieces of wood (parots) that were used to prop up their lights during the winter. People gradually started to add old belongings like clothes, which gave the wooden structure a human-looking aspect, until they became the ninots (figures) that we know today. The Valencian sense of humour soon gave the irony shown in the ninots. The satirical aspect of the monuments is still very important at present.

The Fallas monuments have evolved into temporary works of art which, in some cases, cost hundreds of thousands of euros.

From the last Sunday of February until 19 March, we celebrate Mascletá in the Town Hall Square at 2 p.m. every day. It lasts about 5 minutes.

The Valencian word “masclet”, comes from the word “mascle”, male in Valencian language, and means a firecracker of great sonic power.

You would never imagine how great the sound of gunpowder gets in just 5 minutes. Everything starts shaking, the ground, the windows in the buildings,..

It really is a wonderful roar, a lovely sound to us Valencian people , together with the smell of gunpowder…

Every day the Fallera Mayor (the queen of the festival, elected in a contest) , together with the Fallera Mayor Infantil (the little girl chosen as little queen), and the Fallera Court of Honor, gives permission to the fireworks Master to start the mascletà, from the balcony of the City Hall.

The Fallas festivals take their name from the artistic constructions made of flammable materials, such as paper-mâché and wood, which represent figures and compositions of elements inspired especially by regional, but also national and international current events. Always represented in a satirical context.

These monuments are ephemeral works of art that local artists and sculptors create throughout the year. Some of the monuments, especially those in the rich neighbourhoods, can reach 15 meters high.

The whole economic cost of these monuments is supported by the neighbourhood corporations , also called Falla, or “Casal Faller” and managed by a so-called Fallera Commission. Every year, awards are given by the Official Mein Commission, to those fallas (monuments) that stand out for their spectacularity, size, or satirical themes.

Each falla is required to construct two works, the “falla mayor” (the big one) and the “falla infantil” (a smaller monument dedicated to the children)

Both participate in a separate competition.

In addition, a part of the monument (a figure or a little composition) is sent to the so-called Ninot Exhibition. There is also a competition among the ninots (figures), but this is judged by the public of visitors to the exhibition, who can vote for their favourite work.

The night of the 19th is known as Cremà, during which all the fallas built are burnt in huge and beautiful fires.

The whole city gets involved in the festivals, everybody is in the streets, with the music, the firework displays, the pyrotechnics, to say goodbye to the current festivals. Only the visitors’ favourite ninot in the
exhibition is spared, or pardoned, which is therefore called ‘Ninot indultat’ and is kept in the Fallero Museum together with the indulted ninots from previous years.

Next day is the time for neighbours involved in the festival organisation, and the artists to get back to work, to plan next year’s festivity.

Las Fallas is a festival to protect and to value. The way in which the locals get together and maintain the traditions related to the Fallas, such us the music, the regional instruments, the traditional beautiful costumes made of silk, the typical gastronomy such as paella or pumpkin fritters, has been the reason for
UNESCO to put the Fallas of Valencia on the list of Intangible Cultural Heritage.